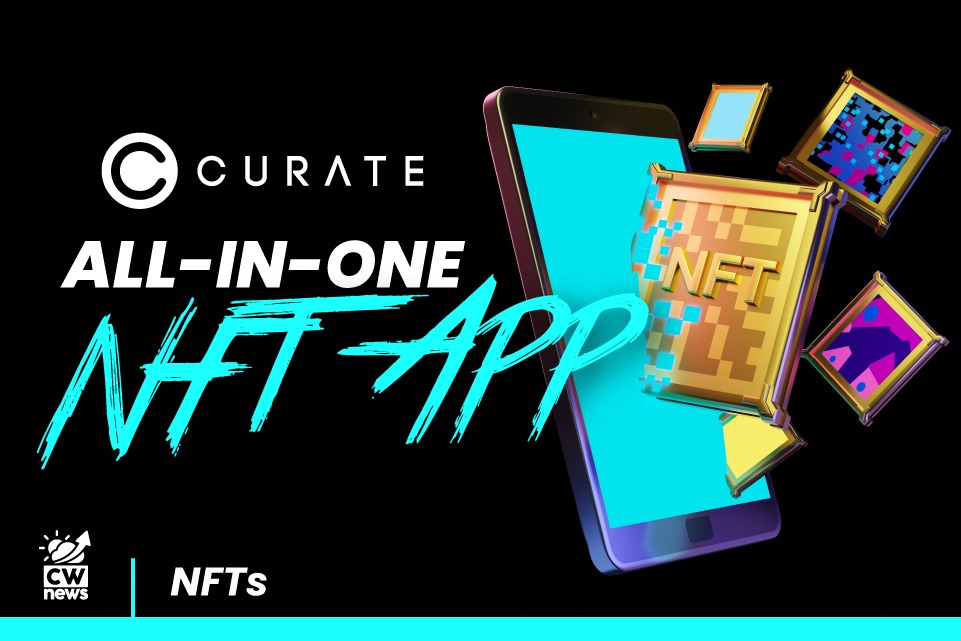 Newspapers say that The NFT boom appears to have peaked for the moment, but the real data shows the opposite since the trading volume on OpenSea is up 27% in the past month, according to metrics from DappRadar. CryptoPunks volume is almost identical, and the NBA Top Shot is down an eye-popping 48%. The whole crypto market is in bigger correction, and NFTs volume is not so impacted mainly because the speculation is not the only incentive to buy them. Moreover, ambitious projects are still coming out on the market like the one we describe today, the Curate project with its NFT marketplace.

What is the Curate-style NFT marketplace project about?

As per the project’s whitepaper information, CURɅTE is the world’s first all-in-one marketplace app that uses blockchain technology as a payment infrastructure and rewards buyers/sellers on all transactions.

CURɅTE is built on its native marketplace, allowing buyers and sellers to exchange physical and digital goods such as gaming, electronics, NFTs, clothing, fashion, and more.

CURɅTE utilizes a decentralized blockchain network as a means of providing a reward in the form of $XCUR, our native token, to buyers and sellers on all successful sales.

As well as this, CURɅTE offers cryptocurrency payments as an optional form of payment outside traditional options such as credit/debit card and PayPal.

Spending XCUR in-app offers zero gas fees as the gas fee amount is credited back to the buyer’s wallet in XCUR.

The CURATE platform is also rewarding the contributors. Every item or content posted by them will generate some reward for them in digital tokens. This will also serve as a form of motivation for them to sell and buy more on our marketplace app. As per the picture below, the team’s ambition is to create a multifunction ALL IN ONE shopping platform with DeFi features.

CURATE boasts a vast catalog of physical and digital goods, including the new and popular NFTs (Non-Fungible Tokens).

The platform will also get rid of fake reviews and feedback easily with the blockchain technology implemented. The first way is through the Artificial Intelligence(AI), which will monitor the comments made by a platform user before it is posted.

The final All In One APP launch, including the NFTs is planned for the Q3 of this year as per the roadmap information.

XCUR tokens serve as a multi-use utility token offering users many use cases on both the Curate marketplace app and outside the Curate ecosystem like Travala, which is a huge advantage.

– Rewarded to buyers and sellers on all transactions

– Stake on our DeFi platform and DeFi partner pools

– Spend on over 3M+ travel products on Travala

– Spend on global activities on Viator

– Spend on over 7M+ holidays and flights on Expedia

– Spend on our partnerships listings via Shopping IO

– Many more as we partner and integrate XCUR with more platforms

– Exchange for FIAT and 1000’s other cryptocurrencies through our partners

The CURATE project is simple in its own way, because it is a platform based on the blockchain decentralized network, as it will be built on the Ethereum Virtual Machine (EVM), with the active implementation of the ERC–20 and BEP-20 token smart contract standard.

Together with the App, the team is going to launch its own hybrid protocol X – chain scalable, fast, secure with the POW/POS consensus mechanism.

From the start, The X-Chain will be interoperable with XCUR ERC-20 and BEP-20 allowing seamless in-app integration.

The start-up was not using the traditional ICO route to run the crowdfunding instead,  the partners and founders financed the project. This is more trustworthy for everyone since it shows the long-term vision of the project by the team and founder and their personal investment.

The team consists of 12 key members with the lead of James Hakim. the  is very transparent and you find them on the website including the social media links.

We like the ambition of the CEO, and the whole team is very motivated and goal-driven. The vision is to go public until two years.

AS per their website information they partnered with credible companies from but even outside the blockchain world like Travala, AWS, Modefi, Trustswap, Cyberfi, Shopping.io

What is the XCUR Tokenomics?

The Curate token (XCUR) is published on the coingecko cryptocurrency website. According to this information, the total supply is only 10 Mil Token. This includes also 1,5 mil tokens burned hence the real number is 8,5 mil total supply.

If we look at current market capitalization, the project is sitting at $ 11,5 mil, which is a very low value considering everything the project offers and plans.

Some of the tokens will be unlocked during the month of June and July. See the token distribution below.

The team is very transparent and ambitious about its plans. You can find everything published on the companies website. The significant milestones are the ALL in one App launch and own new protocol. It is worth mentioning that the company wants to go public on the stock market.  The list of the main company milestones:

Decentralized finance can disrupt the banking industry, and currently, the value locked is rising in the DeFi protocols. The Curate project does not want to stay behind and implement some decentralized finance features, as shown in the picture below.

As one of the many features the project launched is the NFT staking too.

Once summarizing all the information, we have to admit this extraordinary project brings many utilities to the market and may have the vision to be the next Amazon on the blockchain marketplace.  The project has partial competition for NFT marketplaces which are growing nowadays. Still, as all in one not only digital marketplace with its protocol and good token metrics, we are sure the project can have success.  Let us wait for the final launch, and we will continue to monitor projects update.

There is much more coming, so stay tuned and follow us on our socials.