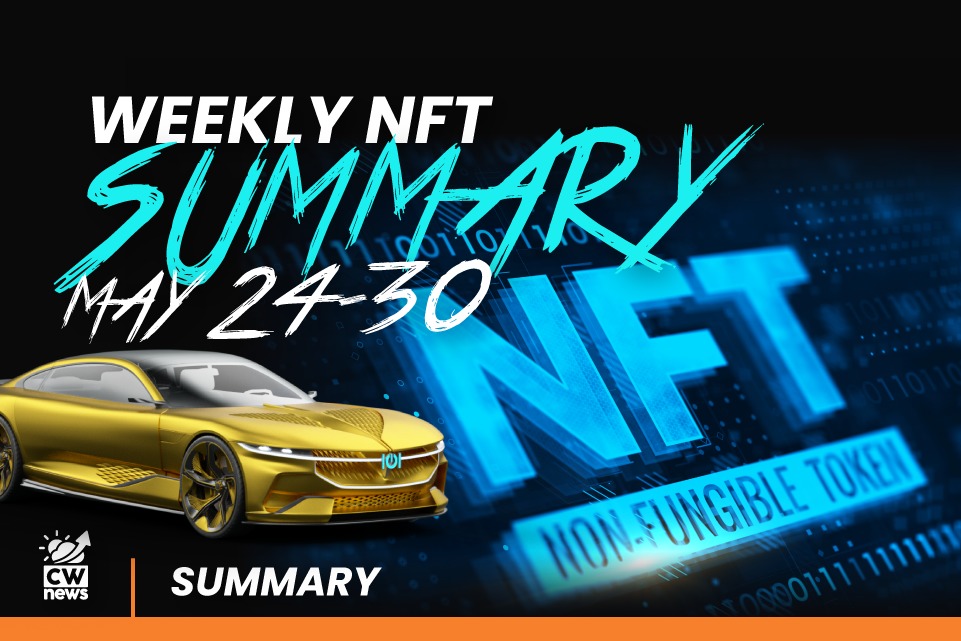 NFTs are a sphere, one of a kind. The more you know about them, the more curious you are. BUT! The environmental impact of Ethereum has been a common criticism amidst the rise of NFTs, which are like deeds of ownership to digital items, such as still images, video clips, tweets, and interactive video game items. There is a lot happening around NFTs every day. We have chosen some catchy NFT news from the last week in our summary weekly news.

Sotheby’s is auctioning off an NFT that can be destroyed if the average global temperature rises 2°C above pre-industrial levels.

The NFT is a 20-second video. It displays a 3D scan of a forest in southern Germany. The video also has a self-destruction warning superimposed on it.

“Just as the real forest will disappear as soon as a certain threshold in global climate change is passed, so will the NFT,” said the decentralized autonomous organization (DAO) that minted the NFT, terra0, in a description.

If the warming trend over the 30 years continues, scientists expect that global temperatures will rise by two degrees by 2062. If this happens, the NFT’s smart contracts allow anyone to “burn” it.

The crypto’s impact on the environment is a common criticism. Burning an NFT may appear to add insult to an injured Earth.

According to the Ethereum Foundation, Ethereum’s upgrade to a proof-of-stake consensus mechanism in the next few years should reduce its environmental impact by 99.5%.

Anyway, eco-conscious crypto projects are on the rise. Recently, two developers launched an NFT project that generates a pixelated tree in accordance with one’s transaction history. It’s called the CryptoTrunks.

The developers paused the project when Ethereum’s gas fees skyrocketed. They have transitioned to a carbon-negative model and became the first major NFT project to do so.

The OneOf NFT marketplace was founded in partnership with Jones and his Quincy Jones Productions firm. They are about to launch in June with support for credit and debit cards across more than 135 fiat currencies, along with unspecified cryptocurrencies and stablecoins.

OneOf has raised a $63 million seed round for the effort, and will be based on the Tezos proof-of-stake blockchain. The usage of Tezos is considered as a “green” alternative to minting NFTs on Ethereum.

The environmental impact of Ethereum has been a common criticism amidst the rise of NFTs.

Tezos relies on a proof-of-stake model. This model requires no mining. This means that the overall network requires significantly less power than Ethereum or Bitcoin. OneOf claims that Tezos uses “over 2 million times less energy” than proof-of-work networks like Ethereum.

OneOf will charge artists $0 for minting fees. They will also allow them to release low-priced NFTs and free collectibles, if they want. However, the platform will specialize in limited edition “OneOf One” NFT drops. OneOf will donate a share of revenue to either a charity chosen by each artist or an “environmental cause partner.”

Many well-known musicians have launched their own NFT collectibles and artwork amidst 2021 including The Weekend, Kings of Leon, Grimes, Weezer, Snoop Dogg, M.I.A, and the Rolling Stones’ Mick Jagger.

The co-founder of financial services giant Guggenheim Partners, Todd Morley is building a “blockchain tower” in New York. The tower will incorporate a wireless network designed to improve blockchain-based communication and trading in the city.

It is still not sure whether Morley will be building a brand new building or just repurposing an existing structure.

With the help of Overline, which utilizes a mechanism called Proof-of-Distance, anyone within a certain ambit of the skyscraper will have access to the network. The network could be scaled to more buildings in the city, in the future.

Morley said: “Overline Network has developed a new way to decentralize wireless communication that can be used at a speed that would allow even crypto mining.”

A part of the tower will also be the “world’s largest NFT museum,” dedicated to digital art tokens. Morley said that it would be “kind of the utility function inside a building rather than just owning bricks and mortar.”

Morley also revealed that he personally invested in Bitcoin. however, he told Bloomberg TV that Ethereum, the second-largest cryptocurrency by market cap, “has a much higher utility through smart contracts,”

and if NFT Real estate are the new trend?