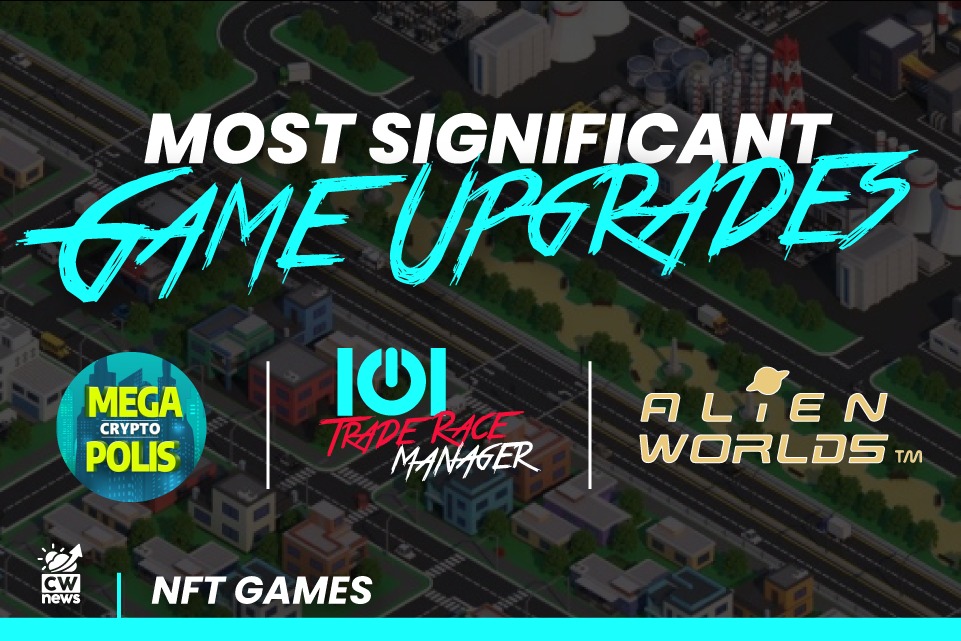 Gaming is the natural home of NFTs. Gamers make the perfect target market for NFTs. They are already familiar with the concept of virtual worlds and currencies. The NFT games are working forwards and will see what great upgrades have been made in the recent time.

MegaCryptoPolis is a decentralized virtual city that is starting its transformation into a metaverse. It is about enabling the players to trade collectible NFTs on a scarce gaming map.

MegaCryptoPolis launched as a 2D city builder game in May 2018. First running on Ethereum smart contracts. It received a 3D upgrade, and expanded to Tron in 2020.

Every building in the gaming map is an NFT owned by a player.

The game’s developers have their sights set on an ambitious “World” upgrade. It will give players the chance to walk through the virtual map with their citizens as avatars.  The fully immersive experience will enable them to enter buildings and admire interiors created by other players.

The vibrant marketplace is also set to pave the way for players to offer their lovingly created NFTs for sale in owned apartments… and complete missions in order to collect the materials that are needed to craft unique tokenized objects.

How the game works

A playable demo for the World upgrade was released in the middle of March. Complete with storefronts, a mayor’s office and the main tower lobby. The main lobby is going to be a major focal point for the game, as every new player gets their own private apartment there.

Storefront owners will get the chance to create unique experiences in a high-profile location.

Districts and land plots continue to be managed on the Ethereum network. And other assets migrated to Polygon to ensure transactions can take place instantly and at zero cost.

In the second quarter of 2021, players will be given the chance to stake the coins in order to unlock perks.

Continual improvements have been made by the game’s developers over the past three years. MegaCryptoPolis announced that it was going to embrace the Matic Network — enabling the team to move the most complex and gas-consuming operations to a sidechain.

“The game logic remains intact and totally decentralized with all the smart contracts and tokens working the same way as they were on Ethereum.”

For MegaCryptoPolis, scalability has been a top priority, with developers acknowledging that levels of adoption would be affected if transactions were slow and expensive.

Developers say that the upgrades don’t end here, and the World demo is only the first step in delivering an even more immersive experience for the game’s loyal community.

Alien Worlds allowed the players to start upgrading their digital assets and also improve their quality. They call this system ‘shining’. The game studio Dacoco retweeted someone else’s tweet suggesting a launch by the end of January 2021.

Shining allows users to send multiple identical digital assets alongside some Trilium. Then receive one digital asset with ‘higher shininess’. The smart contract burns the Trilium used for that action.

The point is that the digital assets with a higher shininess are reportedly more valuable, and useful. The shininess gives a boost to the in-game performance of an asset.

What is Alien Worlds?

Alien Worlds is an exploration and mining game where players can own land, use tools and customize their avatars. The users can also own rare artifacts and have minions to use in battles.

Players in this game world earn Trilium (TLM). TLM is a cryptocurrency token that bridges the Wax and Ethereum blockchain. Players earn TLM through mining, and consecutively can spend the tokens on better tools or weapons.

IOI corporation released the Trade Race Manager 2.0 update. What’s new and why has it become the most popular NFT game so far? Well, let’s explore.

Trade Race Manager (TRM) is the No. 1 ecosystem for gamers and traders. TRM is powered by Defi and NFTs to bring the user lifetime rewards that add an element of gaming to make trading a fun experience.

The traders can trade cryptocurrencies in a different way with TRM. They may bet on themselves and compete against each other in many trading contests, known also as races with the unique blockchain tokens called NFTs which represent your racing car and much more.
The basic NFT game family:

The trader will be able to profit from holding all of these items or use them in the game. If the user decides to sell the NFts, there will be a marketplace available. The focus of the IOI corporation is to enhance the play2earn model where anybody can earn playing the game.

What is the upgrade about?

There has been made a complete redesign of the web page-application. Which means that the entire user interface has changed and each page is made in a new design.

The Trade Race Manager developers have made a new type of race (binary race) in which the strike is 1 IOI and  you can win 1.6 IOI. Play against the other chosen player. The point of the game is that the user will guess in which direction the bitcoin graph will move.

Here is a social proof that Trade Race Manager is another huge NFT game project on the market:

It was just a matter of time when the NFT games will arrive with all the significant and interesting upgrades. Furthermore, the Trade Race Manager was awarded as a No. 1 project with the highest social signal of 56,145 by Dapp..

and the biggest NFT project of the year is going public on various exchanges with big partners and investors such as Polygon, GBV, and Kucoin Labs