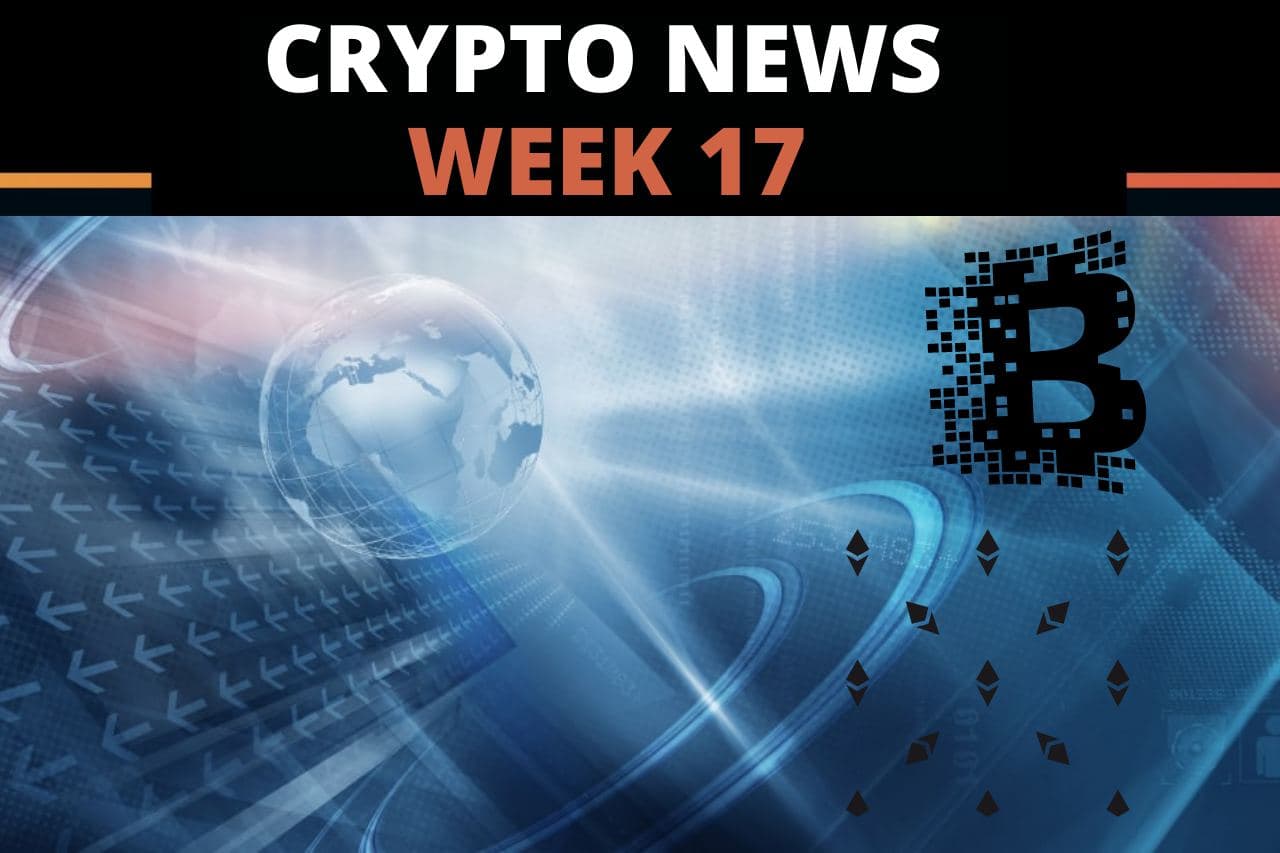 There is a lot happening in the crypto sphere every day. It is quite impossible to keep up with all the news. We have therefore decided to make a weekly summary of major milestones for you. Wondering what’s new? Continue reading and you will catch up with all the significant and interesting information.

On Sunday BTC bounced off a seven-week low around $47,655. Subsequently printing some of its largest hourly gains in two days.

The bellwether cryptocurrency was changing hands around $52,100 as of 2:16 UTC Monday, with buyer volume at the highest hourly levels since April 23.

Tesla has sold portions of the BTC it held on its balance sheet. The auto-tech giant reportedly took in profits of $272 million from the sale of its digital assets. Accounting for just a small percentage of its total BTC holdings, given its initial purchase of $1.5 billion.

While the move to sell its bitcoin at a profit is assuredly what many mainstream investors have been expecting. The small portion that was sold suggests that the company believes retaining most of its bitcoin will be beneficial in the future. Elon Musk took to Twitter to clarify that Tesla sold 10% of its BTC holdings to prove the asset’s liquidity and viability as an alternative to cash on its balance sheet.

If Tesla and Musk were simply interested in using bitcoin to get rich quickly, the company would have gotten rid of its entire stock of bitcoin.

In his tweet, Musk also noted that he has his own separate stack of bitcoin that remains unsold. On May 15, 2020, he announced publicly that he owns 0.25 BTC. But it’s reasonable to assume that stack has grown given Tesla’s own embrace.

3. Visa is moving into crypto in a ‘big way’

Al Kelly, the Visa CEO discussed the payments giant’s crypto ambitions during an earnings call on Tuesday, describing the firm as “extremely well-positioned” to do so.

Visa is undertaking a multi-pronged strategy as it relates to its services related to bitcoin, stablecoins, and on a longer time-horizon, central bank digital currencies or CBDCs. It’s an area he has elaborated on in the past, including a podcast appearance this spring. That time he positioned such plans in the context of Visa being at the intersection of new payment technologies.

During the Tuesday earnings call, Kelly again drew a distinction between the different elements of the broader plan. Al Kelly was citing the spending and purchase of cryptocurrencies, crypto-related APIs for financial institutions, settlements via stablecoins and CBDCs.

“So our focus is on five different opportunities that we see in this space and I would say that this is space that we are leaning into in a very big way and I think are extremely well-positioned,” Kelly said during the call.

Visa said that the firm is in conversation with central banks about their development, suggesting that the payments firm could play a role in that process.

“We’re talking to central banks about the criticality of public/private partnership and in particular the criticality of acceptance because for these central bank digital currencies to have value, they’re going to have to both be secure in the minds of consumers, and that’s something we have a long track record with and could help. And then secondly, obviously they have to have some form of utility,” Kelly said.

A new law in Germany now permits over 4,000 institutional investment funds to gain exposure to cryptocurrencies. The move could spark massive cryptocurrency adoption in Europe’s largest economy over the next few months or years.

The new legislation permits wealth and institutional investment fund managers to invest as much as 20% of their portfolio in cryptocurrencies. The law is set to come into effect on 1 July.

German parliamentarian Frank Schäffler told Decrypt that the move is a crucial step in ensuring cryptocurrency development in Germany. “The addition of crypto assets in Spezialfonds is an important step for their acceptance. Here, the law is going in the right direction, and we expressly welcome it,” he said.

The law was cleared last week by Germany’s federal parliament and is set to be rubber-stamped by the country’s Federal Council as soon as possible. It will affect the existing Spezialfonds and new ones established by institutional investors such as financial institutions, insurance companies, and pension funds.

Thanks to this latest development, over 4,000 existing investment funds in Germany will have access to Bitcoin and other cryptocurrencies.

Currently, these Spezialfonds don’t have any cryptocurrency investments. Hence, allocating 20% of their portfolio could benefit the crypto sector immensely. The cryptocurrency space has seen billions enter the market from institutional investors over the past year.

This is a massive development as the institutional investors and corporate entities have not historically thought highly of cryptocurrency. Currently, an increasing number of financial institutions believe Bitcoin is a store of value and an excellent hedge against inflation; this news comes after American investment bank JP Morgan announced it would offer Bitcoin services to wealthy clients.

MicroStrategy announced its earnings today where it said that the company will continue to acquire even more Bitcoin in an effort to increase value for its shareholders. In the second quarter of 2021, the company purchased 253 Bitcoin for approximately $15 million. The company now holds approximately 91,579 Bitcoin, currently valued at around $5.1 billion, as of today.

The company claimed: “We continue to be pleased with our bitcoin strategy. We successfully raised more than $1 billion of additional capital in the quarter to expand our bitcoin holdings. It now exceed 91,000 bitcoins. We also hosted a very successful ‘Bitcoin for Corporations’ track at MicroStrategy World™ . Where utilized our thought leadership in the cryptocurrency market to show how organizations can incorporate digital assets into their balance sheet management. We will continue to acquire and hold additional bitcoin as we seek to create additional value for shareholders.”

The report did also say that the company may increase or even decrease its Bitcoin holdings in the future.

While the business intelligence company did say it could decrease its Bitcoin holdings in future periods, its near-term sentiment towards the cryptocurrency seems extremely bullish.

6. A $1 billion crypto fund could be on its way from Andreessen Horowitz

Andreessen Horowitz is reportedly gathering thunder for another fund, according to an article from the Financial Times, or FT.

“The new fund, Andreessen’s third that is focused on cryptocurrency investments, is aiming to raise between $800m and $1bn from investors, according to four people with knowledge of the process,” FT wrote on Friday.

A Venture Capital is an entity that is active in the crypto and blockchain sector. It plans to aim the new fund’s capital toward crypto industry projects and digital assets, FT reported.

The VC player was also a heavy investor in Coinbase, which recently went public on April 14. Andreessen Horowitz has offloaded about $120 million of its Coinbase stock. Although it held roughly $11 billion in the asset at the time of its listing, according to regulatory filings cited by FT.

In April 2020, headlines surfaced regarding the entity’s pursuit of $450 million for its second crypto-specific fund. The firm ended up securing $515 million.

The crypto space overall has seen considerable capital inflows over the past year. Evident in the industry’s $2 trillion asset market cap valuation.

In the coming months, you could be able to pay for your taxi with cryptocurrency.

It is hoped that 10,000 UK taxis and 20,000 taxis across Scandinavia will soon accept this kind of payment. HIPS Payment Group Ltd has joined forces with The Payment House to make this happen.

John Cavebring, CEO of Hips said: “With this important partnership, Hips provides another avenue for crypto payments to have market penetration. The consumer-oriented features of the MTO will further allow cryptocurrency to gain worldwide mass-adoption among mainstream consumers.”

The Payment House is described: “As a company delivers solutions to a wide range of business sectors, with its main focus on utilising the newest technology and the markets’ most advanced mPos solutions.”