ET is your simplest and best NFT Aggregator, with simplicity and Web3 spirit. You can easily discover and filter out your  favorite NFTs, buy and sell NFTs in batches, and check the market trend on ET.xyz. Launched on Ethereum first, ET.xyz will also cross-chain to BSC, Solana and other chains. ET.xyz is not only a tool, but also a comprehensive NFT ecosystem that will offer NFT liquidity solutions in the near future. To grow with the ET community, a series of benefits will be shared with our users through ET Pass NFT, $ET tokenomics, and DAO. ET.xyz is built by NFT lovers, for NFT lovers. 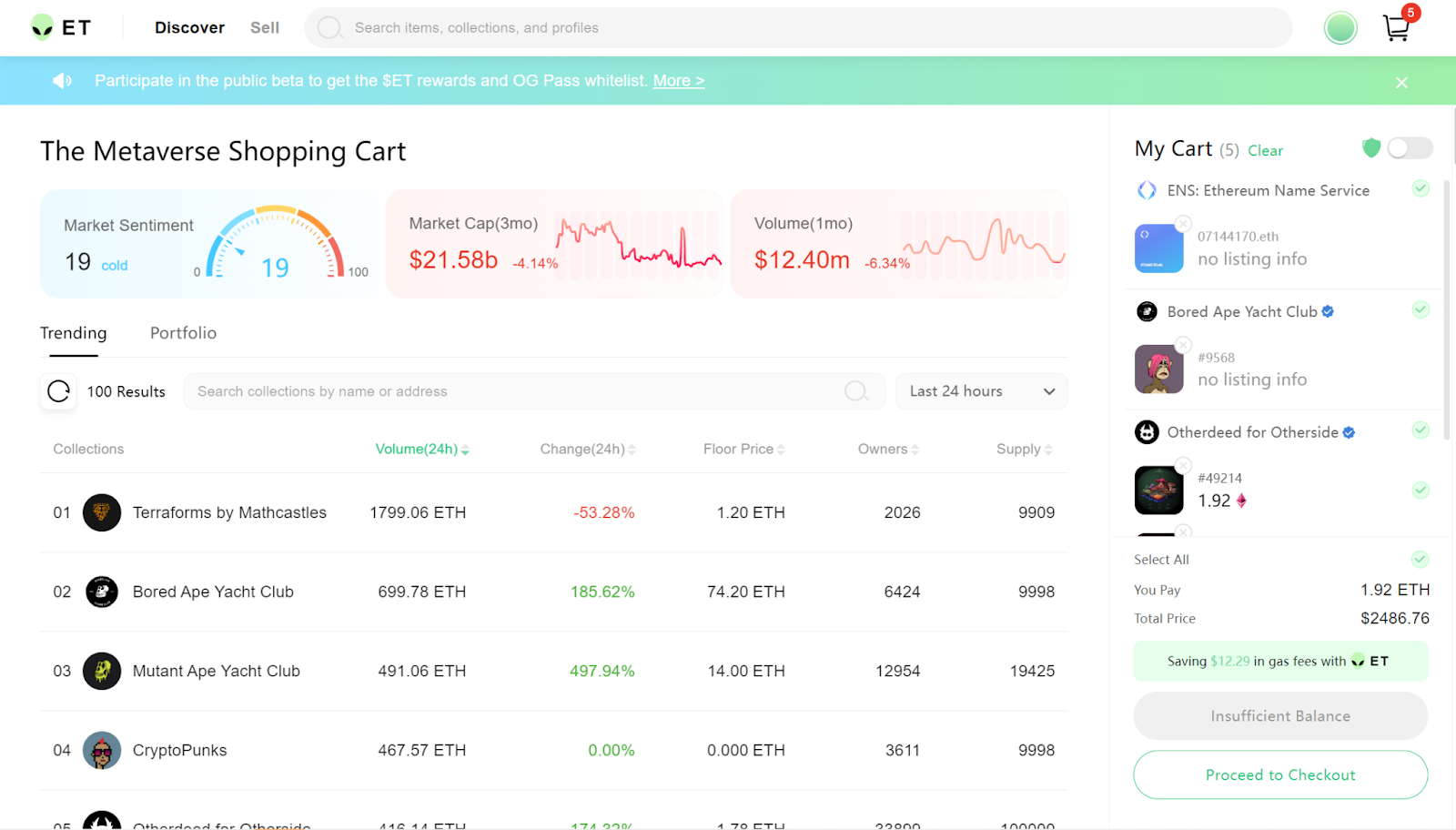 Apart from providing native $ET tokens to incentivize users, ET is also presently the first and only NFT aggregator that shares benefits with the community by its well established and improved membership system. ET will first issue 1000 OG Passes, followed by 10000 PFP Passes to the community.

The ET BETA version was officially launched recently. ET’s website beta.et.xyz is already live and accessible. You can now bulk buy and sell NFTs on ET, look up data trends, quickly search for desired NFTs and many more functions.

Why was ET built?

Firstly, NFTs are web3’s most grand narrative. In May of this year, Opensea’s daily  volume exceeded $400m which was an amazing feat for the industry. What is even more amazing is that Opensea accounted for more than 95% of the whole NFT marketplace. On the other side we have seen that Gem, an NFT trading tool which did not issue native tokens, an NFT trading platform without institutional endorsement only offering floor sweeping, shopping cart and other functions to help save time and cut costs managed to acquire 20% of the volume of the entire market and provided living conditions for the emerging marketplaces such as X2Y2 and Looksrare which broke the record and ended Openseas‘ long time monopoly. Gem’s success as an aggregator is astounding. This is a good product innovation which brought about a new era of NFT trading and showed us the team’s original intention to make good products which we sincerely appreciate.

However, things at Gem are slowly moving out of control. As an avid loyal Gem user, we noticed that the product is increasingly becoming bloated and core main functions have stopped innovating. On the contrary, inefficient and over- complicated functions have been added to the product making it more difficult to use. The operation process has also become cumbersome and has made the community lose their vitality. I check on Gem’s community regularly, but for the last 3 months it has been so disappointing to see the community become quiet without any update on their twitter and discord. There have not been any important updates and all this happened after its acquisition by opensea. This just shows that Gem no longer aligns with the community although we do not believe this is intentional. This acquisition also means Gem will not issue native tokens and they will not share their success with the community. Web3’s spirit of sharing is being overshadowed by Gem. After being acquired, Gem has changed from being an innovator who broke Opensea’s long time monopoly to being a puppet to Opensea, a centralized institution.

This breaks our hearts because this is not the ending we wanted to see. Being the case, we can rewrite this ending and continue with Gems original intention. We have always been keen followers of the web3 spirit; Freedom, openness, fairness, equality, and benefit sharing are the catalysts leading up to ET’s birth.

We hope to stand on the shoulders of the giants in the industry, pay tribute to the pioneers, finish Gem’s unfinished work and build a truly community driven NFT aggregator with web3 spirit.

You might be wondering why we chose the name “ET”. We have the ambition to touch the sea of stars, from the earth to distant outer space to the entire universe.

Web3 will be a new generation of technology and application to expand the boundaries of human civilization. ET will also witness all the historic moments and events of mankind, which will be cast into NFT and released on ET as a commemoration. Musk invented SpaceX, aiming to make humans become trans planetary species in the physical world. We are creating ET today, hoping to let human beings continue civilization in the digital world forever. We also hope that you can join us in building ET ecology and exploring the sea of stars in the universe.

Firstly, in terms of the product, we have built a simpler, more comprehensive, more detailed, more accurate, more convenient, and more cost effective solution for gas fees compared to other NFT aggregators.

Taking gas fees as another example, Gem can save 40% of gas while ET saves 10% more than Gem, that is to say, while Gem only saves 40% of gas fees, ET saves 46% of gas fees. This is because ET has built a deep optimization for gas fees in the smart contract.

In terms of accuracy, when you want to sell NFTs on Gem, you will find that some NFTs in your wallet are not displayed, especially those NFTs that are not available on Opensea. ET does not have this problem. When it comes to simplicity, ET is way better. For example when you are on Gem and you open “collection”, the right side always ejects the Activity of various data icons on the page causing the whole page to get complicated and messy. In addition, ET uses the green line style to make the entire product page thinner and lighter, focusing on core functions such as search, screening, bulk buying and selling, while Gem is doing more and more complicated things.

Secondly, ET is not only a tool, but also a comprehensive NFT ecosystem which is based on series solutions to NFT liquidity in the near future. In order to capture what the whole ecosystem is worth and further realize the web3 spirit of benefit sharing, the ET team have plans to provide long term incentives through tokenomics and NFT Pass. ET will also open all resources to all people and share the dividends of ecological growth with the community. In the future, we will also introduce DAO governance.

A more powerful aggregation function with a complete tokenomics and original NFT pass will give ET an opportunity to stand out among many other NFT aggregators. Furthermore, ET airdrop plan will be announced soon. Let’s stay tuned.